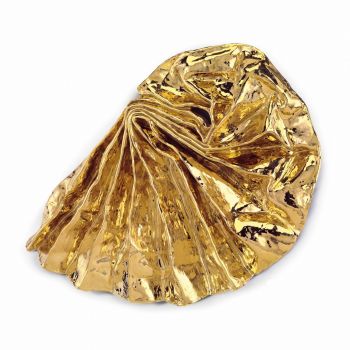 An influential sculptor active since the late 1960s, Lynda Benglis has developed a diverse body of work while focusing on aspects of process, fluidity, and the physicality of form. Roberta Smith reviewed a recent show for the New York Times. "Ms. Benglis is a supremely intuitive, physical artist with an extravagant sensibility and an elusive goal: to give liquidity permanent and dramatic form." Over the course of her career, Lynda Benglis has employed a range of materials, from poured latex to foam to bronze, turning to clay in the early 1990s.

Describing the work as evidencing Benglis' artistic maturity, Roberta Smith wrote "The best are fascinatingly rich in the play of surface and form and in what can only be called abstracted sexuality…They are not overtly new: their precedents include Picasso, Peter Voulkos and even Reuben Nakian and they share concerns with work by John Chamberlain and Frank Stella. But the best might be called subtly new; they distinguish themselves by eschewing the suggestion of vessel or figure and by matching liquid color with the near-liquidity of clay, especially wildly manipulated clay."

Lynda Benglis was born in Louisiana and now resides in New York and Santa Fe. A pioneer of post minimalism, she arrived on the New York Art scene in the late 1960s, gaining renown for her groundbreaking poured latex sculptures and provocative video and performance-based work. She is the recipient of a Guggenheim fellowship and two National Endowment for the Arts grants, among other awards. Her work is included in permanent collections throughout the world, including the Museum of Contemporary Art, Los Angeles; Museum of Modern Art, New York; Solomon R. Guggenheim Museum, New York and the Whitney Museum of American Art, New York.